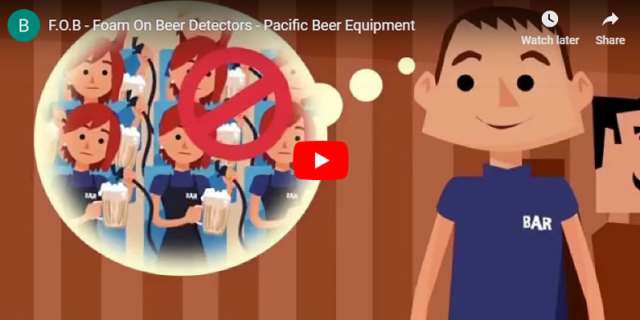 Pacific Beer Equipment’ renowned high-tech Draught Foam Control device (Beer FOBs), the DFC 9500, stops beer flow immediately after a keg empties, both at the key and the tap. This eliminates the spitting and spraying that usually happens when a keg “blows”

And because the DFC 9500 keeps the supply lines full of beer, even when a keg blows, you get instant beer from a freshly tapped keg. That’s right – no more time and money is wasted pouring off foam in order to get to the good stuff.

Savings for businesses are astronomical. Independent testing by various North American Breweries has shown the DFC 9500 saves an average of one pitcher of beer per keg on a typical long-draw run, even greater savings for stadiums, airports, and hotels. Given that there are approximately 40 pitchers in a keg and based on a volume of 40 kegs per week – bars, pubs, clubs and restaurants would save one keg a week. That’s 52 kegs a year! Owners see the return on their investment very quickly.

The DFC9500 is available as a wall mount unit, using Pacific Beer Equipment’s own wall mount bracket or keg mounted. The wall bracket mounts to the cooler wall with two screws and you simply slide the DFC9500 onto the bracket, facing either left or right,depending on the layout of the cooler and the orientation of the trunk lines.